Towards a New Regulatory Framework

We are happy to announced the 1st and 2nd prize winners of our Technology Zone White Paper Contest: Ross Marchand and Ryan Hagemann.

Towards a New Regulatory Framework

The goal of this contest was to generate actionable policy ideas that can be implemented through a zone-based approach to accelerate innovation. Ross and Ryan both submitted creative and actionable proposals to spur innovation in the United States. Both papers are summarized below.

Ross argues that the United States Postal Service (USPS) monopoly over the pickup, sorting, and delivery of mail has led to performance issues, fiscal mismanagement, and a slow adoption of new postal technologies. Ross first details the history of the USPS and how it arrived at its current state, examining in detail key pricing and regulatory decisions impacting the postal system. Policymakers have two options, Ross suggests, on major USPS reform: a taxpayer bailout or privatization and/or ending the postal monopoly. Ross explains in detail how competition was introduced to the German and British postal systems, forcing their former monopolies to innovate and modernize operations. Taking lessons from the German and British cases, Ross proposes the introduction of postal innovation zones (PIZ) that could gradually introduce competition for USPS.

Under this proposal, private companies would be permitted to collect and deliver mail if they enter into a profit-sharing agreement with USPS. After five years of private firm participation in the postal delivery market, Congress would convene a task force to asses the level of competition in the letter delivery market. If certain criteria are met, Congress would implement postal innovation zones in at least three mid-sized cities, in which USPS would suspend operations entirely. From there, Congress would be able to review the performance of firms serving the PIZs and continue to expand the program if delivery standards are at least on par with USPS, otherwise USPS resumes operations in the zone. Ross argues that these reforms will increase USPS revenue, which can be used to pay down debts and increase capabilities in rural areas. Successful liberalization will lead to the introduction of PIZs which combined will improve postal services and lead to greater technological adoption.

Ryan Hagemann, “Revitalizing the Fertile Verge: How Delegating Regulatory Authority to the States Can Usher in a New Era of Innovation and Technological Progress”

Whereas Ross focused on one specific policy area to introduce innovation, Ryan takes aim at the broader framework of regulation in the United States. Existing regulatory institutions, Ryan argues, are too risk-averse and move far too slowly to possibly be able to match the speed with which disruptive technologies are introduced today. Ryan presents three cases in which the inadequate regulatory status quo has dampened the introduction of high-impact social and economic innovations: the Food and Drug Administration and biotechnology, the Federal Aviation Administration and unmanned aerial vehicles, and the Department of Transportation and autonomous vehicles. In each case, Ryan explains how testing and deployment of new innovations in these areas are proceeding ahead abroad where regulatory environments are more accommodating, while the U.S. regulatory environment is slow-moving and prohibitive.

Ryan’s proposal to fix the U.S. regulatory malaise is to introduce soft law regulation pacts within technology zones. Soft law refers to regulatory arrangements, like specified project outputs and deliverables, that govern private sector activities in a specific field rather than full legal statutes and is the result of multi-stakeholder engagement. Ryan proposes that municipalities enter into regulatory pacts governed by soft law that would create zones that broadly follow federal rules and regulations but permit greater experimentation within the zone. Additionally, this framework would allow for regulatory competition between zones attempting to capture a greater share of the market for areas like biotech and unmanned vehicles, while still broadly being governed by federal law. Ryan goes into further detail about what federal legislation to allow for the creation of such zones would look like and what requirements it ought to include.

Finally, we would like to thank our judges, Tyler Cowen, Eli Dourado, and Joe Lonsdale, and the Charles Koch Foundation for sponsoring this contest. 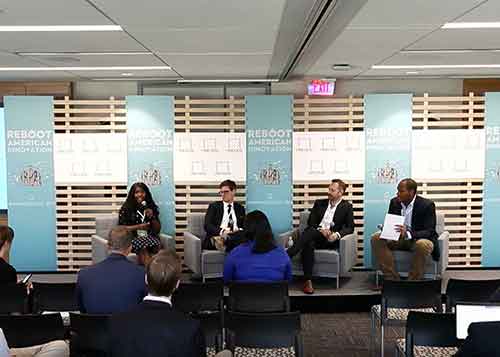